At the end of December I posted about my new Samsung tablet and that I would be posting about some of the apps I have found AND like for the Android/Google tablets.  The original post comparing iPads to other tablets can be found here and listing some of the criteria to look for when considering purchasing a tablet.  Below is a screen shot of some of the apps I added to my tablet.  I have to admit I was discouraged that many of my favorite apps still aren't available for the Android. Some of the ones I did find are:
Symbaloo
Starfall
ABC Mouse
IXL
PBS Apps
BrainPop JR
Spelling City
Lego Apps
Toca Boca
Dr. Panda Apps
Storyboy books
MyPlayhouse
Montessori Crosswords 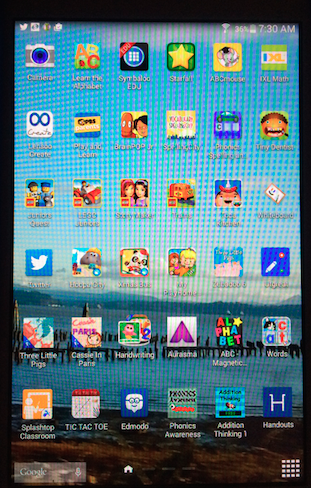 My husband has taken over the Samsung to play his games on... I will continue to steal it back occasionally to keep exploring.  I do like that you can have profiles and a kid friendly profile as well.
Posted by DigitalKindergarten No comments: