Today is a good day for iDevices!  Two terrific apps were released today and I immediately downloaded them and have spent time playing around with them tonight.

One I've been eagerly awaiting is TocaBand ($1.99).  The wonderful thing I've loved about Toca Boca is that just prior to a release of a new product they make one or some of their other apps free or reduce the price.  I highly recommend 'liking' their Facebook page or following them on Twitter to be kept up to date on new releases, free and reduced apps.

I have downloaded Toca's free apps (Toca Doctor lite and Toca Hair Salon-Christmas) for my  and classroom iPads.

For my personal iDevices the Toca apps are an immediate purchase- my children love them so much!  If I make the 'mistake' of telling my daughter there's a new one coming out she harangues me daily to see if it's ready.  They are reasonably priced (usually $1.99) and provide hours of creative play.  There are few apps I pay for based on their 'brand name'.  Toca Boca apps are one of them!  My 4 year old plays Toca Birthday/Tea Party, Toca Store and Toca Salon the most.

The Toca Band app had my 10 year old son engaged instantly.  My 4 year old daughter beamed when I  opened the app and she saw the new logo change into a drum set.  The great thing about Toca Apps is that children learn real life concepts in a playful way.

My son playing around with the app for the first time...


The placement in the band determines and demonstrates tempo and pitch changes.  My daughter says likes switching who goes into the Star spot frequently "if you let her be the star you can play the piano" (or the instrument the character represents).  Her band members talk to each other and argue a bit- "that's my spot' when she plays! 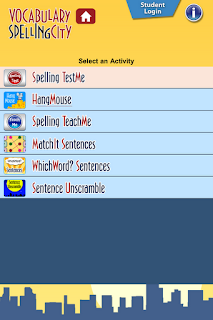 The second NEW FREE app is the IOS version of one of my all-time favorite webpages for education.
Yes, Spelling City has launched their iDevice app(FREE)!  Most of their website doesn't work on the iPad, (some features do though) so this app should make iTeachers thrilled.

The app allows you to pick from lists loaded by username, teacher name, parent name or school zip code or their sample lists.   It does not (yet? I hope they add it in!) allow you to add words within the app. 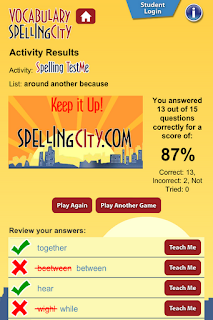 My only problem though is that the word list (my own or one that shows up in their window) isn't loading on my iPad.  It loaded fine on my iPhone though, my son typed in his words and scored an 87%.

Teacher tip- have students take a screenshot (press home button and power button briefly) to show you their results/progress on your next walk around or at the end of the learning time.